A Polymath in Training.

People have used the Markov chain to model volleyball for a while now. The presentation by Albert shows that Markov chains were used to:

·       Determine how long a game will last under each scheme, rally scoring or sideout scoring.

·       Determine the probability that a team wins in each scheme, rally scoring or sideout scoring.

·       Determine the value of serving first in sideout  scoring.

The Albert presentation conceptually shows how the volleyball probability tree is built using Markov chains. She demonstrates that Markov chains is useful in simulating the flow of the volleyball match so that the length of matches can be accurately determined, as it uses probability distribution functions to model the uncertainties in a match. If I recall correctly, Markov chains were used to help FIVB model the differences between sideout and rally scoring when they were thinking about changing the scoring.

This presentation piqued my interest in the Markov chain. I became curious about using the Markov chains to model the number of decision points in a match, and how these decisions are dependent and based on the probabilities that describes each action, how many different probabilities are necessary to improve the accuracy of the simulations.

What I have done as an exercise is to model just the sequence of action in a serve receive situation. There are separate probability trees and flow charts that can be generated for different situations: my team serving, and continuous rallies. The flowchart for my team serving would be identical to the one I created for my team receiving, but with the roles and point winner reversed. There would also be a separate flowchart needed for when the team on defense reverts to offense for a counterattack, the probabilities used in this flowchart might be slightly different because of the counterattack may come from a more chaotic set of conditions, thereby changing the probabilities used. This is just a partial deep dive into the flow of the game and possible implications of the uncertainties coming from twelve individuals playing with a net. I had never intended to build a simulation based on the Markov chain; I leave that to others.

There are two purposes:

·       Examine the number of decision points and all the probabilities that feeds into that decision.

·       Counting the number of probabilities that is necessary for just one rally.

A simple definition of a probability can be: the number of instances that an event A happens in a total of N attempts or opportunities where A could have happened. Pr(A)=Occurrences of A in total occurrences/Total Occurrences of the Event.

The reason that I set the number N to infinity is to show that the law of large numbers is at work and it is best to get as many samples as possible so that the probability calculated is as representative of the event A happening as possible.

Note that the probability is NOT a prediction, it is just a way to give the user a sense of what are the chances that A can happen. This also means that Not(A) can happen as well, the probability of that is Pr(Not A)=1-Pr(A). It can be either one, this is a critical concept to absorb.

I have used conditional probabilities to gain some granularity to show the dependence that the outcome of each action has on the immediately previous action. Markov chains model a specific event which is composed of many complex interactions of many previous events. Whether we like it or not, even as the play moves further away from the initial point of contact —the serve — each action level in the continued play is still historically dependent on that first contact, although the effect decrease dramatically as the play evolves away from the first contact. The conditional probability is the memory that is hardwired into the computations as it flows away from each of the past actions, because the effect of each previous action is already contained in the conditional probabilities, it is therefore not explicitly reiterated with every step.

The probability of each result becoming true, whether it is a point for the serving team or for the receiving team can be calculated by following each action through the flowchart and multiplying the conditional probabilities for each level of action together until an end point is reached. It will become obvious as the process is explained.

The first decision is which serve to execute, that decision is made by either the server or the coach of the serving team. What is left unmodelled is the decision process that goes into the server and the coach’s mind: which passers to target, which zones to attack with the serve etc., those decisions are left out for simplicity and brevity, mainly because this is not a rigorous exposition on every single consideration that goes into a decision. The probability of the success of the  serve chosen is based on the successes each  individual server has with each kind of serve, depending on whether there are enough data collected on the individual server to get a good probability distribution function. For this initial action, the five probabilities listed must sum up to 1: Pr(ST)+Pr(SF)+Pr(JT)+Pr(JF)+PR(S)=1

The next level of action involves the passing team response. I listed five possibilities: Shank, passes ranging from 1-3, and a service error. The action ends with an opponent/serving team point if the pass is shanked or if the passer is Aced and a receiving team point if the server commits a service error, whereas the action continues with a numbered passing value. Note that there are five conditional probability associated with each serve receiving outcome. There are 25 conditional probabilities that need to be collected.

Once the setter has made their decision, the next level of results and associated conditional probabilities are given above. There are five results, one of them: the setter error, results in an opponent point; setter error can be mishandled ball, an attack error if the setter decides to attack, or an errant set. Which leaves us with four possible results: good set, attackable set, hitter need to adjust to the set, or the hitter must hit a down ball or free ball over. There are now 16 conditional probabilities based on who the setter decides to set.

The next level of action comes from the hitter decision. There are seven results. I modelled this level while avoiding individualizing each of the hitters by creating  an “average” hitter by smearing all the statistics of all the hitter on the roster, which I had warned can lead to errant decisions .

One of the results is the hitter error, which results in an opponent point. Six  conditional probabilities are left to carry on to the other side of the net. 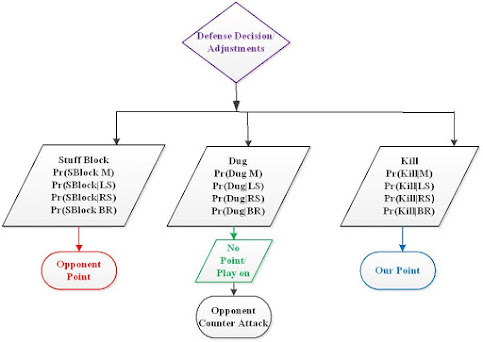 The next action is the cumulative effect of the opponent’s defense, combining the reactions of the blockers and backrow defenders. There are three results: a stuff block which results in the opponents getting a point; a kill, where the attacking team gains a point; and the dug ball, where all the non-termination possibilities are combined: ricochets off the block which turns into a dug ball, or any combination of actions resulting in the opponent mounting a counter attack. This third option reverses the flow of the gameplay and the opponent team now becomes the offense and a new Markov chain flowchart needs to be created. There are 12 possible conditional probabilities.

There are 71 conditional probabilities that needs to be accumulated just for this Markov chain simulation of the serve receive game action. There are four decision points in the model, even though there could be many more if more granularities were to be pursued.

The point of this exercise is:

·       If we desired to predict the outcome of a set or even something as basic as a point, there needs to be massive amount of statistics that needs to be built up to create the conditional probability database, especially since we know that the law of large numbers tell us that we need to have many individual data points if we wish to have accurate conditional probabilities. To simulate the length of matches, these probabilities do not have to be extremely accurate, after all, the application of the Markov chain is not to accurately predict results, the idea is to predict the amount of time it takes to play a set or a match, accuracy and precision does not matter there.

·       Many of the conditional probabilities can be eliminated from consideration because of human bias and the strategic implications of the action, which does pare down the probabilities that have been listed, but even with a pared down list, the number of probabilities, conditional or otherwise, are very large.

As I look at my very rudimentary model, I think of all the uncertainties that are not modelled as I was trying to simplify the model and I think about how much each of them could have affect the outcome of the play. This is the problem of the unmodelled dynamics in control systems, which does affect the predictive ability of the model. But then I am reminded of one of the seven deadly management diseases cited by Dr. W. Edward Deming:  Management by using only of visible figures. Dr. Deming’s point is that there are many unknowns and many uncertainties that exists in any endeavor that involves many humans making many very human decisions. His admonition is that  it is foolhardy for decision makers to expect absolute accuracy from any system because there are many things that are unmeasurable and there are many things that are unknowable. Once we realize this, we understand that even as uncertainties and randomness affect what we do in our daily decision making, our need to absolutely eliminate uncertainties and randomness from our daily lives, and from our daily sports, is misguided. In addition, to not recognize this fact and to willingly pour more time and resource into eliminating or minimizing uncertainties and randomness in statistics is a fool’s errand. This is not to say that working on statistics will not give us more insight, we must always seek to learn more from the descriptive statistics that we have, creating statistical categories which will help us understand WHAT our team is doing, but we must never get into the mindset that our final goal is to eliminate uncertainties and randomness in our statistical ponderings; we need to understand our limitations.

Posted by Polymathtobe at 1:15 PM